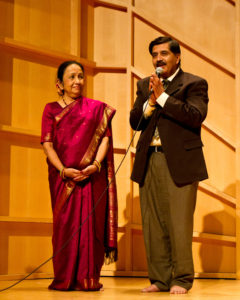 Born in Trisoor, Kerala and raised in Mumbai, Saavitri trained with great teachers like the late H.A.S. Mani, T.K. Govinda Rao, and the Bombay Sisters, C. Saroja and C. Lalitha.

A child prodigy, she was initiated into Carnatic Musict by her older sister Sethu Mahadevan at the age of three and went on to win the All-India Level Light Music Competition at the age of 18 when she was presented an award by President Radhakrishnan.

Her recordings include a Kannada Devotional “HARISMARANE”, a rare collection of Dasara Padas, “KRISHNAM VANDE JAGATHGURUM”, “DHUMAI BHARATHI” and “TAMIL AMMAI PADALGAL” along with her illustrious sisters, C. Saroja and C. Lalitha.

The music critic for THE HINDU hailed her rendition of the Mohana Raga as “mesmerizing” and The Indian Fine Arts Society gave her the BEST VOCALIST award for her performance in the 1999-2000 Music Festival.

Apart from her knowledge of South Indian Classical music, Saavitri is also adept at Hindustani bhajans and is a much sought-after artist for Folk music, Film songs and Arangetrams.

Saavitri’s knowledge of both Classical and Folk Dance found full expression in a series of dance ballets such as Ashtalakshmi, Andal Kalyanam, the Thyagaraja Pancharatna Kirthanas “Jagadananda Karaka” and “Sadhinchane”, Swathi Thirunal’s Ramayana “Bavayami Raghu Ramam”, Vyasaraya’s Dasavatharam “Devaki Nandana”, Kuravanji Natyanatakam composed by Punarapi Bharathi Sri Kabaleeswaran and to the delight of audiences, even Kummi, Kolattam, and a fun-filled children’s theatre of Tamil nursery rhymes composed by Punarapi Bharathi Sri Kabaleeswaran. She has been commissioned to create a musical score for Nritya Saagaram Dance Academy’s “Navarasamaalika”, a dance ballet that explores the nine degrees of emotion.

After moving to New York, Saavitri founded the MUKTHAMBAR FINE ARTS INC. in 1996 and has been teaching music and dance ever since.

The Smithsonian asked her to perform and conduct workshops on GITA GOVINDA by JAYADEVA on RADHA and KRISHNA. The songs have been released as audiocassettes.

Saavitri has conducted workshops on Bharathanatyam and Carnatic Music for the Brooklyn Arts Council’s Folk Arts Program and she was invited to the Smithsonian Institute to represent Indian culture in New York City for the Smithsonian Folk life Festival.

Most recently Saavitri was a featured artist at the Lincoln Center where she composed the music for “SRUSHTI” which received rave reviews and she was interviewed by the prestigious Lincoln Center project “Window on the Work” that introduces the American public to the arts and culture of other communities.

She was honored for her distinguished leadership in raising the social and economic status of women as a Performing Artist and Teacher by Pragati Inc. New York and the Kannada organization Basava International, New York, conferred on her the title GANA VIDYA VISHARADE, which means “foremost exponent of Indian Classical music”. A suitable title for an artist of her stature.