The Sanskrit word vastu means a dwelling or house. The vÄstu, takes the meaning of “the site or foundation of a house, site, ground, building or dwelling-place, habitation, homestead, house”.

The underlying root is vas “to dwell, live, stay, abide”. The term shastra may be translated as “science, doctrine, teaching”. Historians such as James Ferguson, Sir Cunningham, Dr. Havell have suggest that Vastu Shastra developed between the period of 6000 BCE to 3000 BCE, adding that Harappa, Mohenjo-daro stands on the principles of Vastu Shashtra.

It has been noted that Vastu was one of the greatest architect and town planning expert ever produced by India who lived thousands of years ago. The king would send him for planning and establishing a town.

Vastu Shastra also Vastu Veda and Vastu Vidya, “science of construction”, “architecture” is an ancient Hindu system of architecture which consists of principles born out of a traditional view on how the laws of nature affect human dwellings. The doctrine of Vastu Shastra is concerned primarily with architecture – building houses, temples, apartments and other buildings.

The designs are based on directional alignments. It is applied in Hindu Architecture especially Hindu Temples and covers other domains, including vehicles, vessels, furniture, sculpture, paintings etc. While Vastu had long been mainly restricted to temple architecture, there has been a revival of it in India, in recent decades. While the fields are related, Shilpa Shastra deals with sculpture – forms, statues, icons, stone murals etc.

There are many principles in Vaastu Shastra. To mention a few which involve certain mathematical calculations, Maana is used for proportional relationships in a building and Aayaadi specifies conditions for maximum well being and benefits for the residents of a building. Below are some of the basic theories in vaastu sastra. 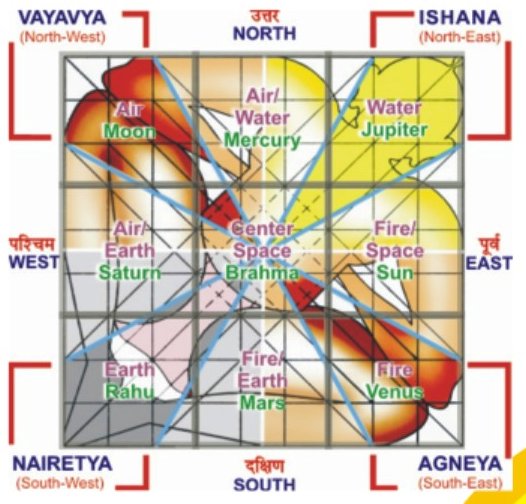 According to Vastu Shastra, the world comprises of the five elements known as the pancha maha bhoota. Out of the eight planets, ours has life because of the presence and balance of these five elements. The five elements are as follows.

EARTH (Bhumi) – Earth, the third planet in order from the sun, is a big magnet with North and South poles as centers of attractions. Its magnetic field and gravitational force has considerable effects on everything on the Earth.

WATER (Jal) – Jal is represented by rain, river, sea and is in the form of liquid, solid (ice) and gas (steam, cloud). It forms part of every plant and animal. Our blood is mostly water.

SPACE (Akasha) – The Akasha provides shelter to all the above elements. It is also considered the primary conductor of all energy sources within the universal context – physical energies such as sound and light, social energies such as psychological and emotional, and cognitive energies such as intellect and intuition.

There is an invisible and constant relation between all the five elements. Thus, the person can improve their conditions by properly designing their buildings by understanding the effectiveness of these five natural forces.

Vaastu Shastra combines all the five elements of nature and balances them with the person and the material. It takes advantage of the benefits bestowed by the five elements of nature to create a congenial living and working environment thereby facilitating spiritual well-being and paving the way for enhanced health, wealth, prosperity and happiness.

In Indian architecture, the dwelling is itself a shrine. A home is called Manushyalaya, literally, “Human Temple”. It is not merely a shelter for human beings in which to rest and eat. The concept behind house design is the same as for temple design, so sacred and spiritual are the two spaces.

The “open courtyard” system of house design was the national pattern in India before Western models were introduced. The order introduced into the “built space” accounts for the creation of spiritual ambiance required for the indweller to enjoy spiritual well-being and material welfare and prosperity.

A typical layout of a square building, with a grid of 9×9=81 squares, is meant for family persons (for scientists, artists and yogi a grid of 8×8=64 is prescribed). The space occupied by the central 3×3=9 squares is called Brahmasthanam, meaning the “nuclear energy field”. It should be kept unbuilt and open to the sky so as to have contact with the outer space (akasha). This central courtyard is likened to the lungs of the human body. It is not for living purposes. Religious and cultural events can be held here—such as yajna (fire rituals), music and dance performances and marriage.

The row of squares surrounding the Brahmasthanam is the walkway. The corner spaces, occupying 2×2=4 squares, are rooms with specific purposes. The northeast quarter is called Isanya, the southeast Agni, the southwest Niruthi and northwest Vayu. These are said to possess the qualities of four respective devatas or gods—Isa, Agni, Niruthi and Vayu.

Accordingly—with due respect to ecological friendliness with the subtle forces of the spirit—those spaces (quarters) are assigned as follows: northeast for the home shrine, southeast for the kitchen, southwest for the master bedroom and northwest for the storage of grains. The spaces lying between the corner zones, measuring 4×6=24 squares (6 on each side), are those of the north, east, south and west. They are meant for multi purposes.

The Vastu Purusha Mandala is an indispensable part of vastu shastra and constitutes the mathematical and diagrammatic basis for generating design. It is the metaphysical plan of a building that incorporates the coursly bodies and supernatural forces. Purusha refers to energy, power, soul or cosmic man. Mandala is the generic name for any plan or chart which symbolically represents the cosmos.

In Hindu cosmology or in Vedic Cosmology the surface of the earth is represented as a sphere and not as a flat surface, “Cakracasah parinaham prthivya” It says “people who reside on the surface of earth circumference” [Rig veda 1.33.8].

However in context of the earth as a home or resident it is represented as four-cornered in reference to the horizon’s relationship with sunrise and sunset, the North and South direction. It is called Chaturbhuji (four cornered) and represented in the form of the Prithvi Mandala. The astrological charts or horoscopes also represent in a square plan the positions of the sun, moon, planets and zodiac constellations with reference to a specific person’s place and time of birth.

The legend of the Vastu Purusha is related thus. Once a formless being blocked the heaven from the earth and Brahma with many other gods trapped him to the ground. This incident is depicted graphically in the Vastu Purusha Mandala with portions allocated hierarchically to each deity based on their contributions and positions.

Brahma occupied the central portion – the Brahmasthana- and other gods were distributed around in a concentric pattern. There are 45 gods in all including 32 outer deities.

The Vastu Purusha is the presiding deity of any site. Usually he is depicted as lying on it with the head in the northeast and legs in the southwest but he keeps changing position throughout the year.

Vastu shastra prescribes desirable characteristics for sites and buildings based on flow of energy called Vaastu Purusha. The morning sun is considered especially beneficial and purifying however the sun does not play a specific role in the Vaastu shastras. In fact it is not mentioned in the texts. None of the heavenly bodies are mentioned in the Vaastu Shastras hence they are not considered in the proper application of Vaastu principles.

Energy is primarily considered as emanating from the center of the building. Many people believe that it comes from the North East corner but in fact it comes from the Brahmasthan or center of the building. It originates from subtle earth energy called Vaastu Purusha and subtle cosmic energy (Unified Field) called Vastu Purusha which meet in the center of the building and then spread outward in all directions. These two energies unite and form the five elements which then distribute in the four corner zones. (see Fabric of The Universe: The Origins, Implications, and Applications of Vastu Science and Vaastu Technology)

While many people think that “Vaastu energy” is emanating from the North East, it is a misunderstanding. People also attempt to equate the energy of the house with the planets. That is another misconception. Vaastu energy emanates from the central part of the house (Brahmasthan) and not from the east. (Pranava Veda and Vaastu Shastras). This energy is a mixture of Vaastu energy, which is subtle energy from the earth, and Vastu energy which is subtle energy from Consciousness itself. (See Fabric of the Universe: The Origins, Implications, and Applications of Vastu Science and Vaastu Technology by Dr. Jessie Mercay).

Many assumptions are made about Vaastu Science that are completely untrue. From these assumptions people have made up ways to “correct vaastu” by selling yantras, crystals etc. for that purpose. This is completely innapropriate as there is nowhere in the Vaastu Shastras that indicates that any of these devices can correct faulty Vaastu.

Once a person becomes educated in Vaastu Shastra by an authentic Shilpi Guru (teacher of Vaastu shastras) then it becomes clear that these ideas are just an allegory and doesn’t mean word to word.

The central area in all mandala is the Brahmasthana. Mandala “circle-circumference” or “completion” is a concentric diagram having spiritual and ritual significance in both Buddhism and Hinduism.

The space occupied by it varies in different mandala – in Pitha (9) and Upapitha (25) it occupies one square module, in Mahaapitha (16), Ugrapitha (36) and Manduka (64), four square modules and in Sthandila (49) and Paramasaayika (81), nine square modules. The Pitha is an amplified Prithvimandala in which, according to some texts, the central space is occupied by earth. The Sthandila mandala is used in a concentric manner.

An important aspect of the mandala is that when divided into an odd number of squares, or ayugma, its center is constituted by one module or pada and when divided into an even number of squares or yugma, its center is constituted by a point formed by the intersection of the two perpendicular central lines. In spatial terms, the former is sakala or manifest/ morphic and the latter is nishkala or unmanifest/ amorphous.

The mandala is put to use in site planning and architecture through a process called the Pada Vinyasa. This is a method whereby any site can be divided into grids/ modules or pada. Depending on the position of the gods occupying the various modules, the zoning of the site and disposition of functions in a building are arrived at. A Mandala has certain points known as marma which are vital energy spots on which nothing should be built. They are determined by certain proportional relationships of the squares and the diagonals.

A site of any shape can be divided using the Pada Vinyasa. Sites are known by the number of divisions on each side. The types of mandalas, with the corresponding names of sites is given below.

God with attributes and Nirgunopaasana, the supreme as absolute spirit unconditioned by attributes. Correspondingly, the Sakala, complete in itself, is used for shrines of gods with form (sakalamoorthy) and to perform yajna (fire rites).

However the Nishkala is used for installation of idols without form- nishkalamoorthy- and for auspicious, pure performances. The amorphous center is considered beneficial to the worshippers, being a source of great energy. This could also be used for settlements. In commercial buildings, only odd numbers of modules are prescribed as the nishkala or amorphous center would cause too high a concentration of energy for human occupants. Even here, the Brahmasthana is left unbuilt with rooms organised around.

In accordance with the position occupied by the gods in the mandala, guidelines are given for zoning of site and distribution of rooms in a building. Some of these are: